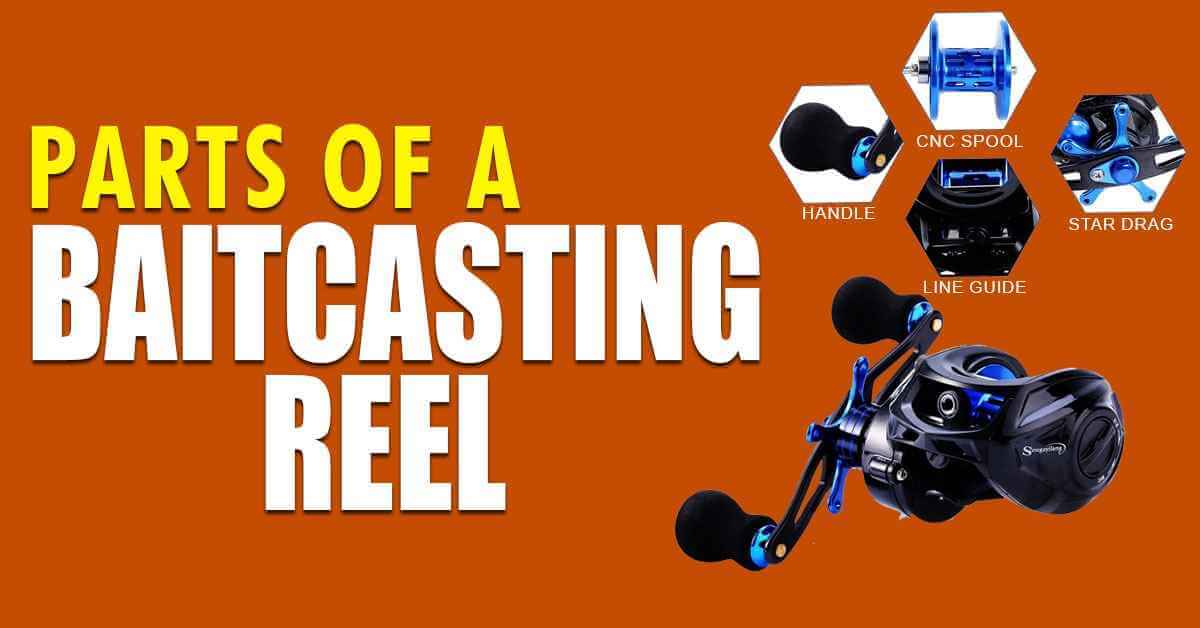 Does understanding or recognizing the different parts of a baitcaster feel tricky to you? Or If you are a beginner at fishing, then this is your chance to learn if you haven’t already!

To make a successful bass fishing, you need a baitcaster reel. It is most commonly employed for precision fishing when the predatory fishes require a level of control and accuracy.

This article tells you all about baitcaster and its parts alongside their functions that will help you take your fishing to another level.

EXTERNAL PARTS OF A BAITCASTER

Let’s start from the exterior and work our way deeper. The 10 external parts of a baitcaster and their roles in fishing is explained below:

This is the spot where the reel and the rod meet. At the top of the rod, there is a solidly set rectangle or square. The reel’s foot is connected to the seat, which holds the reel and is frequently followed by a threaded keeper that may be moved.

One thing that you should consider about the foot is its placement. Unlike a spinning reel where the reel is attached at the bottom of the rod, the reel must align with the rod’s guide. This positioning ensures that the line flows straight from starting guide and into the water which results in a smoother and more friction-free throw.

Another important thing to remember about the foot is to make sure the nut on the back of the socket is snug. One valuable pro tip is to double-check it before actually putting your first cast into the water.

It acts as the “house” for all of the interior parts of a baitcasting reel. As a result, it is what keeps the baitcaster together.

The reel cage houses the gears, ball bearings, and other components which are discussed in the next section.

It is capable of collecting salt, sand, dust, and grime. As a result, it is critical that it be cleaned and maintained on a regular basis.

The brake is a distinct feature of the baitcasting reel which play a big role while attempting to manage backlash (the tendency of the line to tangle).

Backlash is a problem with the baitcasting reel that discourages beginners from using it.

They are present on the side of the reel, near the angler’s hands, and are divided into two sections: the initial brake, which is bigger and more tunable, and the deceleration brake. A reel’s braking system can be either centrifugal or magnetic.

The first one employs blocks to minimize friction, whereas the latter employs movable magnets to manage electromagnetic forces and slow the spool’s pace. Magnetic brakes are often more costly yet easier to use.

It works as a portal to the internal parts of the reel. It can be removed easily for the purpose of maintaining and cleaning. There are four screws on the baitcaster that must be removed to take off the side plate.

The latter is critical to avoid salt accumulation on thr fishing rod. As it may create plenty of issues and, in extreme cases, ruin your reel if not handled.

Drag is usually located on the side of a bait caster and maintains the tension of the line while fishing. It is a starfish-shaped part that acts as a knob or a button and efficiently controls backlash while shortening the time of untangling the line.

When it is about playing a fish and trying to retrieve the line while catching, the drag setting is crucial. A line having more tension (low drag) may break a lot easier as compared to the reel with a minimal drag, which allows the bass to yank the line off the reel. Just pulling the line with hands and physically attempting to draw it out can be used to assess the drag.

The catch rate of an angler is improved when the baitcaster drag control settings work on low tension.

Because of the form of the feature, the baitcaster drag is sometimes called ‘star drag.’

It handles the cast and makes it smoother and free of backlash. It manages the speed of the line that comes from the spool.

Typically, the cast control knob is located near the reel handle and colored similar to the reel body. They can be replaced. As a result, the color might vary based on your preferences. Knobs are also available in a variety of sizes.

It is present at the bottom of the reel. It fixes the spool and allows the line to move freely over it. The knob on the side of a baitcaster is the adjustment for the spool tensioner which is quite important while setting up the baitcaster.

It is present in front of the spool and helps move the line in and out of the water easily in the cast or retrieve.

It prevents unspooling and tangling from happening on their own. As a consequence, it contributes significantly to the reduction of friction and line breaking.

The reel handle is an evident feature of every reel and serves as the primary contact between the hand as well as the reel itself, assuring the line’s operation. Baitcaster reel handles work similarly to ordinary fishing reel handles in that they are in charge of moving the interiorly situated gears and, as a result, the spool.

Handles are touched more often. For this reason, they should be comfortable and well-designed with knobs on them for better grip. The preferred material which is used to make handles is aluminum. It turns the reel’s spool for cast or retrieving.

INTERNAL PARTS OF A BAITCASTER

Now, that you have the knowledge of external components, let’s start introducing the internal parts.

It is made up of aluminum or alloys of metal which is light in weight, and resistive to corrosion and water.

Professional anglers like baitcasters because of their spool construction, which allows them to use lures like jigs that lay underwater and are bounced against the bottom. Because both the line and the bait are much more possible to arrive in contact with underwater impediments, this type of fishing needs more strong and more durable equipment.

Despite having benefits, spooling a baitcasting reel can be difficult, particularly for beginners. The first step should be to ensure that the spool’s surface is smoother, clean, and devoid of any unwanted substances. The line may then be put into the spool by applying minimal stress with your index and thumb.

It is present between the moving wheel and the center axle. It ensures circular movement and helps the spool to move while limiting the frictional force at the same time.

Some ball bearings help in assisting the handles of the baitcaster reel. Without ball bearings, it is hard to do casting or retrieving.

Most of the reel contains 4 ball bearings. Different parts of the ball bearing are given below:

RING: It is referred to as the raceway. It helps in holding the ball bearing. It consists of an inner ring and an outer ring.

CAGE: It is located between the inner ring and outer ring. It helps in keeping the ball bearing in even spaced.

BALLS: These are the gates of the spool. They prevent unwinding during casting and permit glide-backs during retrieving.

SHIELDS: They prevents unwanted debris and acts as discs either on one or both side.

Gears referred to as toothed wheels run the wheels. They are available in a range of materials, including brass, zinc, aluminum, and stainless steel. They also exist in a variety of sizes hence selecting the “optimal” gear ratio is often a worry.

In contrast to other fishing reels, baitcaster reels seem intimidating. But, once you are well aware of its parts and what they do, fishing will certainly become a rising hobby.

Bass fishermen prefer baitcasters for one simple purpose: control. A baitcaster gives the bass fisherman the control they need to make accurate casts in difficult circumstances and over other obstacles.

Another important factor in bass fishing is the speed with which a surface bait crosses the water.

There are different parts of the baitcaster that are discussed in this article. Some parts need extra attention while buying a baitcaster. It includes a spool, ball bearings, gears, and drag.