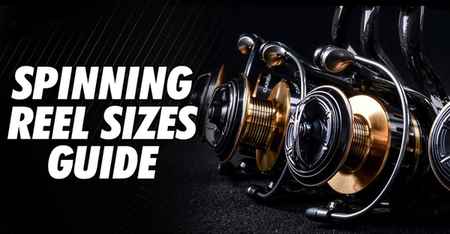 For some people, deciding what should be the size of a reel of spinning they need for fishing might be difficult, especially if they are new to the sport. Talking about these reels, they are often available in various dimensions.

Picking the proper measurement that fits your requirement should be one of the most important considerations when purchasing a new reel. When you start watching the large selection of available spinning reels, you’ll see that each model has a number assigned to it. This number indicates the size. The basic idea is that the fewer the number, the tinier the reel.

How are Spinning Reels Sized?

Most companies refer to the size with a two- or four-digit number. However, reels beginning with similar numerals will be of equal measure.

Size 10 reel of spinning: Brand A

The reel size is the same for both 10 and 1000. The latter is true across the whole spectrum of spinning reel sizes.

Before you go out and buy a new spinning reel for yourself, think about what kind of fishing you’ll be doing with it. The reel size you select should be appropriate for the type of fishing you expect to conduct.

What Size Spinning Reel for Bass?

A 3000 spinning reel is the best size for bass fishing. It’s all about modern spinning reel technology, for the most part. A decent 3000 spin reel has a lot of power despite its small size and weight. It’s ideal for larger fish. A proper 3000 is also tuned enough never to feel like it’s overkill on a smaller fish.

When it comes to surf fishing, the size of the reel is crucial. Because you need a robust and powerful reel when your bait is deployed 80-100 yards from the shoreline, you can stay linked to the other end of the line and retrieve the line effectively if something bites. Thereby, the reel size is so important when fishing from the shore.

You’ll need a reel with enough power and capacity to handle everything the surf throws at you. A larger reel is preferable if money and exhaustion aren’t factors.

However, since large reels are expensive and difficult to manage, the best reel size for shore fishing is 5000-6000 (or 50-60). This size will comfortably handle most beach-caught fish while still effective when monster fish eat the bait.

What Size Spinning Reel for Trout?

The greatest trout spinning reel might mean the difference between a successful day at the lake or a frustrating one. A light line and a smooth drag that fights fish without snapping them off are required for selective trout.

The flashy lures and various baits are appealing, but they won’t help you catch fish if you can’t land them. Finding a proper balance with ultralight rods requires reels with low start-up inertia, smooth drags, and compact diameters. You want something light enough to feel subtle strikes while also powerful enough to handle a large fish.

What Size Spinning Reel for Salmon?

Traditional trolling reels, spinning reels, and fly fishing reels are the three varieties of salmon reels. Exploring with a flasher or mooching with herring are the most common methods for catching salmon from a boat.

Salmon can be detected with spinning reels or fly fishing reels in rivers and streams. A line counter on a standard-style reel is proper while trolling for salmon. The latter enables the distance behind the boat and lures depth to be calculated.

What Size Spinning Reel for Crappie?

The spinning reel still reigns supreme when talking about getting into a Crappie mess. These reels’ outline and consequent production provide anglers with everything they require for successful Crappie fishing and recovery strategies. Here are the top four options:

What Size Spinning Reel for Redfish?

Redfish are also easier to catch than other inshore fish. You can complete the task from the flats, a dock, or the beach. You will, however, require a high-performance reel capable of handling a redfish.

To catch a redfish, you’ll need a medium-sized, mid-weight reel because it will reduce the trauma of a long fight. You can also choose an ultra-light reel to catch a red drum if you desire.

It is critical to recognize that the reel’s weight is not the only thing to consider when selecting the best redfish fishing reels. In addition, when choosing a redfish reel, additional aspects such as line capacity, drag strength, and gear ratio must be considered.

The body of reels (also known as “housing”) might be composed of graphite, aluminum, or a combination of the two. The aluminum housing is robust and has little flexibility than graphite, but graphite is usually light weighted.

It is essentially a personal choice whether strength or weight is more critical. Aluminum bodies are standard in the highest-quality freshwater reels. Still, if you like salt water, the preferable option would be graphite due to its corrosion resistance.

A solidly made reel body is another consideration with no loose or flimsy pieces. All parts that are moving should work smoothly and without any back play. Furthermore, casting reels have fewer parts than spinning reels. A mechanical breakdown can be reduced by selecting a reel with fewer parts.

Weariness and weight are other important considerations when choosing a reel for a straightforward reason. When dealing with a light-weighted reel, less strain is placed on the forearm and wrist, which is especially noteworthy for people who spend much time in the water in terms of tensions of joint and fatigue.

The majority of reels will display the weight in ounces. When looking for a spinning reel, keep weight in mind, and make sure you’re contrasting reels of similar size when comparing reel weights online.

What Does A Reel Size Mean?

The size of the reel, as a rule, refers to its line capacity. To put it another way, the higher the number on the reel, the bigger the reel and the more line you can spool. Furthermore, a larger reel implies a more vital and heavier reel depending on the manufacturer. An enormous reel typically has more gears, bearings, plates, and washers, resulting in a heavier product.

Most reel manufacturers label their reel sizes with two or four digits. However, the first two numerals usually relate to the same reel size. If the number on reel X from brand A is 2500 and on reel Y from brand B is 25, for example. The two reels are then of equal size.

Due to the range of large reel sizes accessible, a spinning reel for targeting various freshwater game species is preferred. I can fish for trout and panfish with a little reel and an ultralight rod or chase prize catfish with a mega-sized reel and a giant surf rod. Because each manufacturer rates reels differently, there are no standard numbers for the multiple sizes.

Balance is the KEY! Matching the Spinning reel with the right Size Rod is most important.

If the purpose is fishing for crappie and white bass, a 2000 or 20-size reel with 4- to 8-pound test lines should be used. A 6- or 6-1/2-footlight or light action medium spinning rod along with this reel. This approach is ideal for trout fishing with jigs, baits jerk, or drift rigs baited.

A size of 2500 or 25 reels is ideal regarding crappie shooting dock or bass finesse methods like shooting drop. For dock shotting, spindle reel with a line of 6-pound and pair it with an action rod of 7-foot light. Use a fluorocarbon line of 8-pound and a medium action rod of 6 1/2-foot for drop-shotting.

Generally, there are other dimensions of more giant reels typically used for fishing saltwater. However, the 4000 or 40 size reel is the most commonly used for freshwater fishing. Having a light stuff rod of 8- or 10-foot and test monofilament of 20-pound, fish for catfish with this reel.

The size of the reel you choose depends on a few considerations.

What are you trying to catch?
What weight of the line do you intend to use, and how does it suit your rod?
Finally, and perhaps most importantly, how does it feel in your hand?

With so many different species, fishing scenarios, and bodies of water to choose from, finding a good spinning reel can be difficult. It becomes a little easier after removing the fancy manufacturer’s jargon and concentrating on the essential characteristics. However, when your fishing skills improve and you desire to have more fun and enjoyment with the fish.

Using little, less weighted reels and lines could provide a bundle of contentment and amusement while hooking and stringing out into that larger fish.